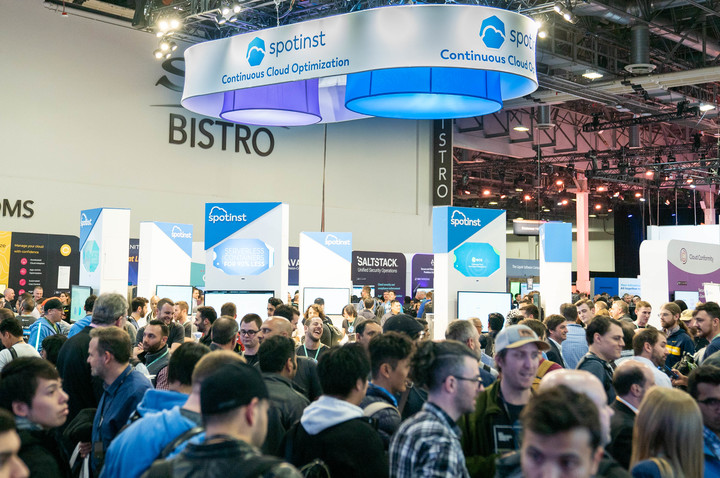 The saying “work hard, play hard” was definitely the unspoken theme last week at re:Invent 2019. With endless sessions, vendors and parties, the roughly 65,000 attendees were busy day and night. Over at the Spotinst Diamond Sponsor booth, we met with thousands of companies interested in optimizing their AWS cloud consumption. During our re:Invent party at Caesars Palace we hosted hundreds of guests and enjoyed hanging out with Jeff Barr.

With hundreds of sponsors introducing their innovative cloud technology, and with AWS announcing 77 products, features, and services during re:Invent, we wanted to take this opportunity to focus on a few takeaways we believe will be highly relevant for 2020.

As opposed to previous years where we met many re:Invent attendees who were just contemplating migrating to the cloud, the 2019 attendees were overwhelmingly post cloud-migration. From the US Census Bureau to one of the largest department stores in Australia, from Helsinki to Rio De Janeiro, from Tokyo to Toronto (and on and on), the focus is no longer just about migrating workloads, but rather how to best manage and optimize those existing AWS cloud deployments.

In our conversations with customers, partners, and new prospects, the Spotinst story is resonating in a big way. Our expanded suite of blended cost optimization and workload automation offerings complement AWS’ products and services. Many folks we spoke with described Spotinst as an “easy button alternative” to manually managing Spot Instances, Reserved Instances and Savings Plans in AWS.

The strategic importance that Spotinst plays in enabling increased and easier consumption of AWS compute resources was underscored during the Global Partner Keynote, when Doug Yeum, AWS Channel Chief, mentioned Spotinst as one of the successful companies in the AWS Marketplace. The numerous sessions where Spotinst and customers presented together at re:Invent (e.g. Spotinst with Ticketmaster, Spotinst with VMWare and more) further reinforced Spotinst’s value and position in the AWS ecosystem.

AWS is Shifting from “Public Cloud Mostly” to “Anywhere You Need”

AWS is taking the hybrid cloud concept to a whole new level and is now offering a variety of compute and storage services to support businesses that need their cloud to extend closer to home. Here are the main announcements in this area:

In what leading industry analyst Patrick Moorhead considers to be the “biggest piece of datacenter chip news this year”, AWS announced their 6th Generation EC2 instances, designed in-house by Amazon’s Annapurna Labs. AWS said their new M6 instances have “40% higher performance at 20% lower cost equating to a 40% improved price/performance” when compared to M5 instances. These instances, based on Arm N1 core, will also be available for compute (C) and memory (R) optimized instances, in 2020. Built to perform in AWS’ data centers, these instances will no doubt provide incredible value for customers and give Amazon a competitive advantage for the near-future.

With Kubernetes becoming the leading container orchestration tool, it’s no surprise that AWS announced that Fargate, their serverless option for containerized workloads, now supports EKS. Additionally, as the Fargate service is more expensive than regular On-Demand EC2 pricing, AWS is trying to ease the financial burden by offering Spot pricing for ECS workloads running with Fargate. Combined, these new offerings are clearly intended to make the cloud easier and more affordable to use for containerized workloads.

Spotinst is excited to see these enhancements as they demonstrate the increasingly critical role of containers in cloud applications, a role we’ve also been helping to accelerate with our fully automated platform to run & optimize production workloads while reducing costs by up to 90% and simplifying infrastructure operations.

As we have discussed in the past, the more cost-effective and easier the cloud is to use, the more it will be used. All of the above re:Invent announcements, from better microchips powering AWS data centers, to hybrid cloud and localized cloud offerings, to Spot pricing for Fargate, all make the cloud more accessible to broader swaths of industry and society. And the greater the accessibility of the cloud, the greater its consumption will be.

Here at Spotinst, we are likewise committed to making the cloud easier and more affordable to use and see our mission as complementing AWS in this monumental cloud revolution.

We look forward to 2020 and hope you will join us on the journey to cloud optimization.